Every European country has it’s own unique style of cooking, and the Christmas kitchen is no exception. Many are easy to recreate, so you can travel the continent through your palate! Here is a selection of the best traditional Christmas food in Europe to try at home during the holidays. 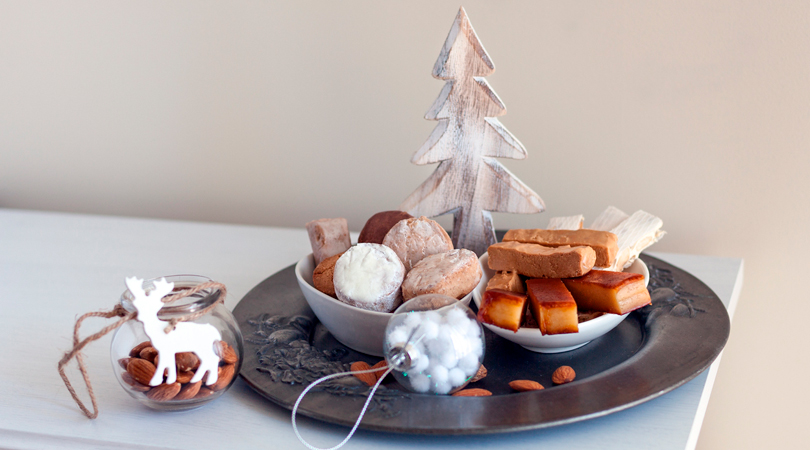 In all Spanish houses at Christmas, you will find a wide assortment of special sweets treats. Nougat is the star of the traditional Christmas food, and there are countless varieties. From the chewy nougat of Alicante to the soft and almond-shaped nougat from Jijona. Nor can we forget the Polvorones, an almond shortbread from Andalusia. Powdery and sweet, it turns to dust in your mouth. Finally, we have the Roscón de Reyes, eaten on 6th January. This bundt shaped cake, filled with marzipan and decorated with candied fruit, has two surprises hidden inside. If you find the king, you’ll have good luck all year round, and if you get the bean, you have to pay for dessert. 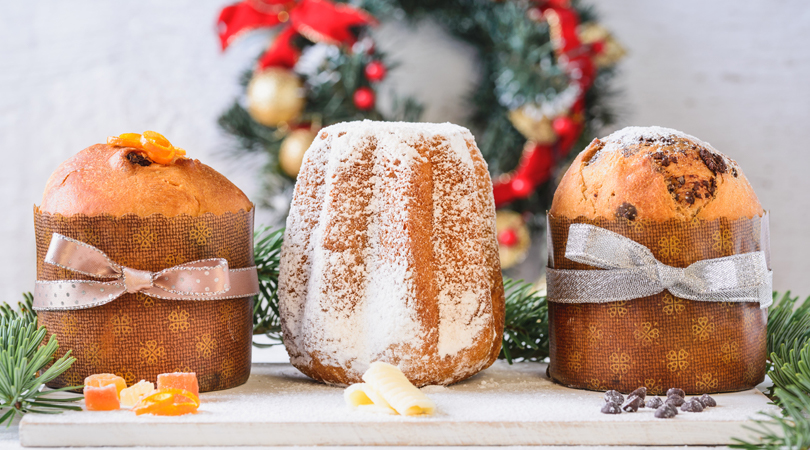 In Italian homes during the Christmas period, the air is permeated with the aroma of the pine decorations and the “ragù della nonna” simmering in the pot. For many Italians, this is the magic of the holidays: the beauty of getting together, with traditional Christmas food. In every Italian house, accommodation or restaurant, you will find Panettone, Pandoro and Nougat for breakfast. Panettone and pandoro are delicious spongy cakes filled with dried fruit and candied peel. While the nougat comes in a myriad of flavours. Chocolate, hazelnuts, gianduja, almonds … In short, Christmas is a time to make your mouth water! 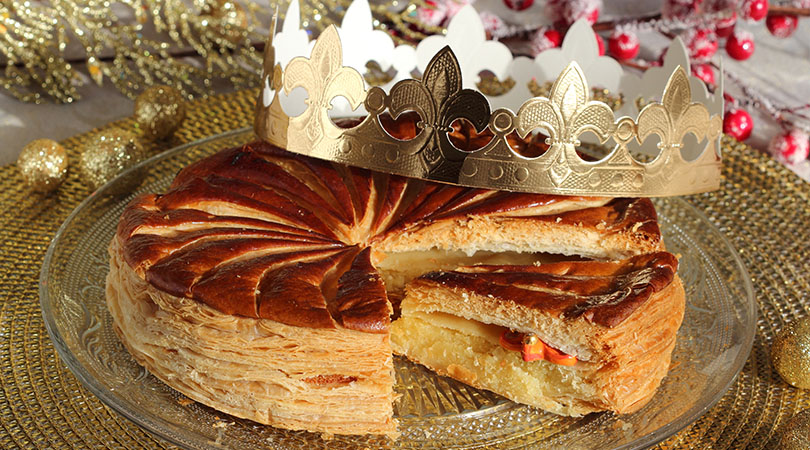 With Santa’s footprints still in the snow and minds yet full of Christmas memories, the French are already looking towards the next celebration. The first Sunday after Christmas marks The Epiphany of the Three Kings. La Galette des Rois is eaten in every French house and is the crown of traditional Christmas food. This galette consists of a light dough filled with melted marzipan. Inside a porcelain bean is hidden. The youngest person in the group hides under the table and hands out a piece to each person. Whoever finds the bean will be the king or queen! 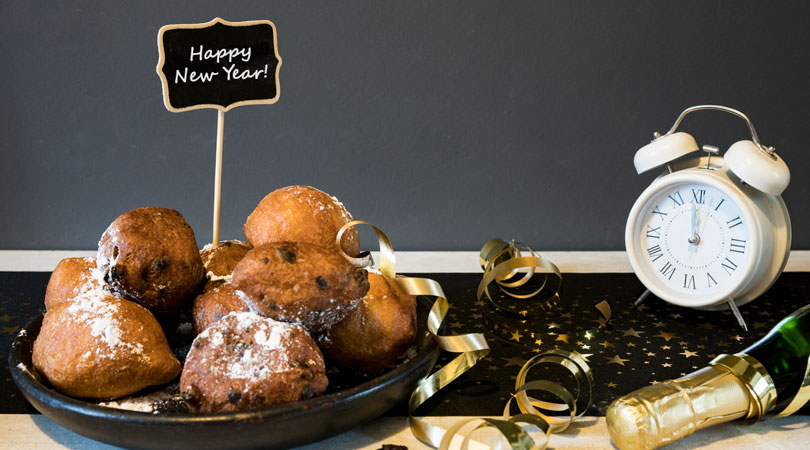 Oliebollen and Stollen- The Netherlands

The Dutch are crazy about bread. So it’s no wonder that Stollen is a popular part of traditional Christmas food in Holland. Although the origin of this sweet bread containing nuts and dried fruit is German, there is a difference. The Dutch version also contains almond paste running through the middle. Another unmissable treat in the Netherlands is the oliebol. These fried dumplings are filled with cream or raisins and dusted with generous helpings of powdered sugar. They’re served on New Year’s eve and certainly help to bring in the festive spirit!

Bed and Breakfast The Netherlands 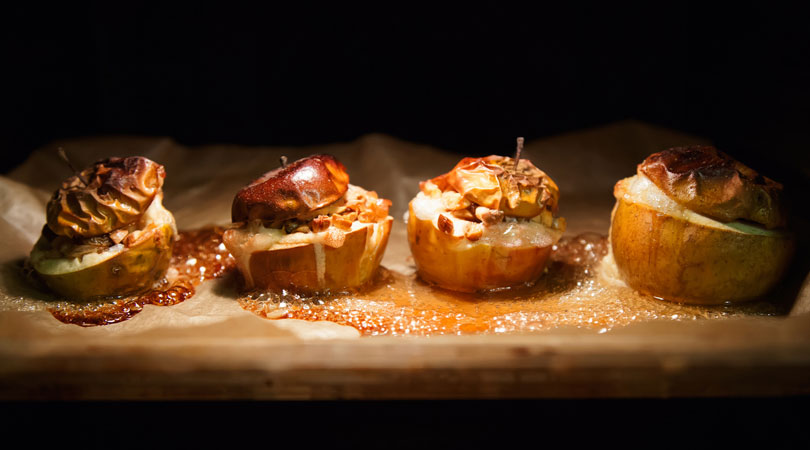 If you fancy a culinary holiday this Christmas, look no further than Germany, with its rich blend of cultures and cuisine. “Children come and guess what is in the oven …” And so begins a famous Bavarian poem about baked apples. In the past, the apple was the only local fruit that could be stored during the winter months, making it an inexpensive way to savour a sweet dish at Christmas. For this simple but tasty dish, an apple is cored and filled with dried fruit, raisins and marzipan, baked in the oven and served with a vanilla sauce. Take a virtual culinary holiday through Germany and the rest of Europe by trying delicacies such as figs coated in chocolate, nougat, polvorones, rice pudding, Murcian Christmas cakes or a Roscón de Reyes! 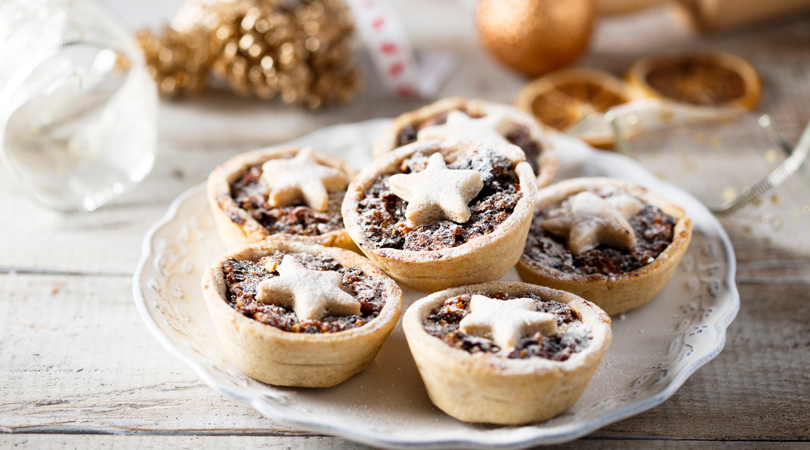 Traditional Christmas food in the UK has a history stretching back hundreds of years. The typical roast turkey dinner, complete with roast potatoes, sprouts, stuffing, and bread and cranberry sauces, is served in over 90% of British homes, year in year out. And it would be a crime to forget the pigs in blankets, little chipolata sausages wrapped in bacon. Sweet treats such as Christmas pudding and mince pies are richly loaded with dried fruit and spices such as cloves and nutmeg, soaked in brandy, and then served with extra lashings of brandy sauce, cream or butter! You better loosen your belt because no one walks away from a British Christmas dinner still hungry!